Between the villages Brăneşti and Coban, in the valley of the Prut River as you transverse along the road about 200 km from Chisinau itself, you come across small, but very curious natural phenomenon, known as "The Hundred Hills".

This unique phenomenon is in the space between the Prut and Dniester rivers. In fact, there are many more hills than a hundred and to be absolutely pedantic around 3,500 or so. These hills cover an area of 1072 hectares in size, which means that this place is over 8 km long and 2.3 km wide. As for the height of the hills, it is very different and varies from 1.5 to 30.5 m. The last hill in the chain is called "Gypsy Hill".

The first record of this natural phenomenon is mentioned in 1716 in the famous work "Description of Moldova" by hospodar Dimitrie Cantemir. The scientist named this unique phenomenon "Centum monticulli".

The first study along with a detailed description of the complex was carried out in 1927. Researchers found were determined to find out the reasons for the formation of these hills. Some scientists believe that "The Hundred Hills" is a unique place in Europe, where the Mediterranean Sea reefs are gathered in such quantity and visible quality. These scientists think that the reefs covering the territory of Moldova the entire 20 million years ago formed the hills.

Other researchers are of the opinion that such a great number of hills appeared due to various landslides and avalanches, which re-torn pieces of moving rocks, previously being a part of the Prut slope area, but seasonal floods periodically shaped the hills, giving them their appropriate current form.

The fact that so many hills are accumulated in one place gave rise to many legends associated with the civilisations that vanished long ago. Based on several archaeological discoveries there is a myth that all the hills are allegedly burial sites of Geto-Dacian mounds. Local people think that the hills appeared long ago, "during the invasion of the Turks in these places when there was a battle."

However, recent observations have shed light on the situation from a different angle and found that these hills actually are still understudied creations of nature. It was noticed that between the hills, spring water and rainfall gathers, forming small lakes in some places.

Many kinds of plants grow on the territory of the hills: hyacinth, anemone, wild carnation, iris, many varieties of flax, etc. From the first gentle spring flowers to sultry July days many prairie plants alternately bloom, presenting a new colour palette every day. The new kind of the plants delights the eye and the heart by their charm.
Tags: Centum monticulli, Dimitrie Cantemir, Geto-Dacian mounds, Gypsy Hill, Natural monument, Natural monuments of Moldova, unique phenomenon 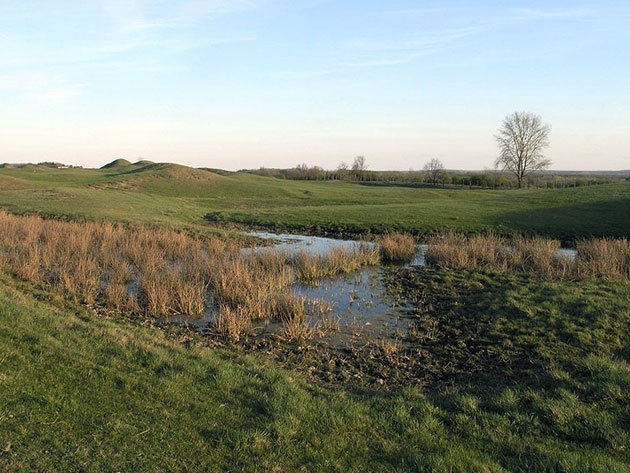