About 200 km. north of Chisinau, in the centre o Țaul village there is the largest park in Moldova which was founded in the early 20th century and located around the homestead of the Pommer family. This reserve is the handiwork of the landscape architect I.Vladislav-Padalco recognised by the high society. The park is considered one of the brightest and most successful of his works.

Materially the park is very unique. The arboretum or collection consists of about 150 different types of trees, shrubs and vines, of which more than a hundred forms are exotic. With various trees such as Beech, Douglas fir from Canada, Japanese cherry, several types of Larch, several kinds of Fir, including many that can’t be found anywhere else in Moldova except in the park.

The Țaul park is conventionally divided into an upper part, where the rustic residence of Boyar Pommer is surrounded by many avenues with various flower beds, and a lower part that resembles a forest consisting of separate groups of trees which are typical to different geographical areas. Being the largest park in Moldova it is equipped with extensive network of alleys, different walks and paths, the length of which in total is more than 12.5 km. Entrance for visitors is free.

Big Russian landowner, financier Ivan Petersburg Pommer founded this national park more than one hundred years ago. In 1901 he ordered Hippolyte Vladislav–Padalko, a landscape architect from Odessa, to create an unusual arboretum or park for Moldova. The trees were brought to the park from many different places; the Far East, Siberia, and Western Europe. Within three years many local farmers were turning this land into a paradise. By 1904, all the work on the creation of the park had been completed.

Besides the rare trees in the park, it is also famous for a whole complex of historic buildings. For example, within the reserve there is a beautiful palace of Pommer family, two outhouses specially built for guests and several utility structures. The water tower has also survived to this day, having being an iron barrel even in those times, which was constructed with rivets, because there was no welding those days. This barrel served its owners for a pretty long time - it was used until about the end of the 1970s. The complex infrastructure is also quite amazing, the sewerage and water supply are still preserved; this fact proves the quality of the original building and construction.

During the Soviet era the whole Țaul complex functioned as a sanatorium. People wishing to have a rest or just tourists from across the country as well as abroad flocked to this place. Today, everything looks different. In several places Țaul "palace" has broken windows, the front doors paint has peeled off, the facade plaster crumbling. If partial restoration works are not done urgently, the main architectural will fall to the ground in the not too distant future.

The main and only reason why the park is so desolated in the 90s was the lack of funds. When the park complex was transferred into the control of the state company «Constructorul» in 2004, some improvements took place although there were no significant financial injections. Now, in order to prevent the destruction of this historical monument, the object is being guarded and cleaned. However it is not enough to stop further destructions of the Țaul complex. The cleaning of the lake alone requires a budget of about 800 thousand lei. But all in all just to bring the reserve in a relatively normal appearance 100-150 million lei is required.
Tags: arborvitae, beech, Boyar Pommer, dendrological collection, Douglas fir from Canada, historic buildings, homestead of Pommer family, I.Vladislav-Padalco, Japanese cherry, Moldova parks, Moldova rnational parkeserves, several kinds of fir, several types of larch, Tsaul park, unique park 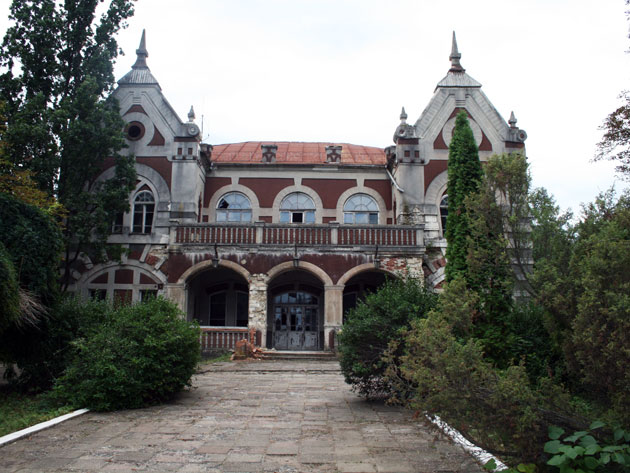