History of the Organ Hall

REF NR: 7399
The Organ Hall building is a monument of architecture of the early 20th  century and is located in the Moldova municipality - in its capital - Chisinau.

The contemporary building of the Organ Hall, was initially the Bank of the Clear of Orthodox Church of Bessarabia, this construction was started by the decision of the Chisinau Duma or the City Office. In 1902 was declared a competition for architectural design, the winner is awarded the prize of 1500 roubles, which was quite a large sum in the 20th  century. Michael Chekerul - Kusha, a 38- year-old engineer with his project won this competition. The project was approved by the outstanding architect A. Bernardazzi. Some sources reveal that he Bernardazzi gave a piece of advice to the young engineer; accordingly the ideas muted were that the grandiose building had to be constructed in classical style with elements of Romanticism.

In 1903, the construction of the City Bank building began on the Alexander Street. Due to the fact that the city authorities had difficulties from 1904 to 1908 years the construction process was postponed and completed only in 1910. Constructed building combines lightness and monumentality at the same time. The design is framed on the main and side facades by four- pillars in Corinthian portico Order. Also sculptures. richly decorated the building with the likes of  the figure of Mercury, the Roman god of trade, standing above the main entrance of the bank. Unfortunately, this statue has not survived to our time. Since the nude on the building that is located on the main streets in our capital did not satisfied the taste of the Soviet officials. According to their instructions the statue recaptured "manhood", and after time the sculpture began to deteriorate. Today, the remains of this sculpture are stored in the warehouses of the former Exhibition of Economic Achievements (now the Exhibition Center “Moldexpo”) and they are not available for public review.

During the World War II the building virtually suffered very little damage, while other downtown buildings were severely damaged by the bombing.

Thus, it was only necessary to restore the lions which decorated the facade of the building.

In Soviet times this building was housed the State Bank of the USSR. The new building of the State Bank was built in 1973 (architects G.L. Kalyuzhner, S.M. Shoyhet, B.V.Vaysbeyn). Thus the question as to what to place in this architectural monument was on the table, eventually the authorities decided headed up by Ivan Bodiul, the First Secretary of the Communist Party in the MSSR to examine various options. The following suggestions were made: in the former building of the State Bank to place the Wedding Palace, the exhibition hall of arts and crafts, among the proposals was also to organise there a restaurant of Moldovan national cuisine. 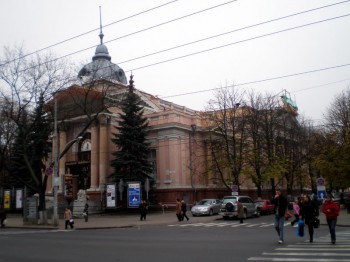 In 1975 began the reconstruction of the Bank building on which had previously stood the Orthodox Church of Bessarabia and this redesigning it into the Organ Hall. reconstruction was completed in 1978. Y.L. Leonchenko was the chief architect of the reconstruction. The exterior of the building was saved, with changes only being made to the inside. Banking hall was redesigned with the auditorium being able to easily accommodate 555 seated.

Specialists from other regions of the USSR and even other countries were busy with the reconstruction of the Organ Hall. The ceiling decorations were brought from Odessa. Masters of Leningrad created gilded decorations and chairs. Masters of Czechoslovakia produced chandeliers. Sculptor L.I. Dubinovsky executed bas - reliefs that adorn the walls of the hall. "Rieger Kloss" is еру Czech company that produced the organ instrument (it contains in total 40 registers and 3000 pipes).

On the 16th September 1978, was held the first concert. There appeared Harry Y. Grodberg – the famous Soviet instrumentalist of organ music, he also headed the selection committee for estimating organ sound. In concert also took part Ion Josan – the cellist, Maria Bieshu, Choir under the direction of Veronica Garstea and Svetlana Bodiul on her own. Many famous musicians performed at the Organ Hall after its opening. Among them are: the Russian State Chamber Orchestra under Viktor Tretyakov, Moscow City Philharmonic Ensemble "Madrigal", Vladimir Spivakov, Igor Oistrak , as well as other artists of chamber instrumental and classical organ music from different countries. In the walls of the Organ Hall began to hold an annual international music festival "Martisor" (organised in 1966, before the reconstruction of the Bank). 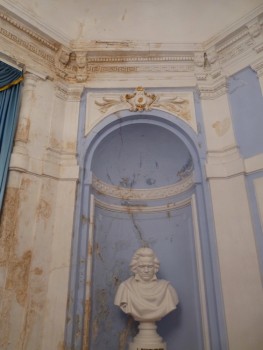 Recently in Chisinau Organ Hall give concerts huge amount of foreign artistic groups and performers, including musicians from the United States, the Czech Republic, Romania, Spain, Italy, Germany, France and other countries. Each year numerous art exhibitions, competitions, and festivals are held. It may be noted the following the most important events held in the Organ Hall - "Days of New Music" - a festival of contemporary classical music, “Crescendo” - International festival of classical music, "Martisor" - International Music Festival, and other international and national competitions for vocalists and instrumental artists.

Tourists and visitors visit the Organ Hall, as it is a city landmark. Usually, the Organ Hall provides concerts of winners of international competitions and famous musicians. At the same time, the Organ Halls gives concerts titled as "Young Talents", where participate young musicians and wide public get to know new young and talented musicians. There is extremely wonderful acoustics in Chisinau Organ Hall – all artists know this. Besides the organ, there are high-quality musical instruments, including pianos of trademarks as “Steinway”, “Bechstein”, “Yamaha” and six harpsichords. 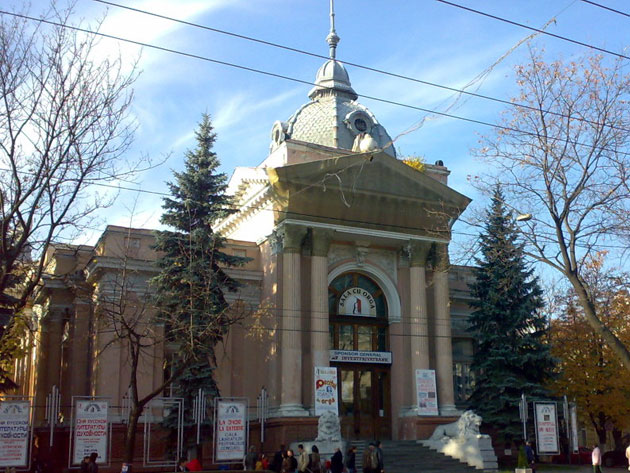