The village of Coban is located 200 km from Chisinau. According to recently found historical documents this place is the earliest in Moldova and dated to the 1374th year, but those times it was called the village Zubreuts Ryadom. With this settlement begins one of the most expressive nature monuments of our country - a chain of rapids. This formation is unique for Europe! Scientists named this phenomenon of nature chain of coral reefs, the locals call this monument "tsiglee", and in special literature sources it is called «toltre» - a word taken from the Polish language.

«Toltre» or "Rapids of the Prut” are focused on a specific, limited area in the basin of such small rivers as Larga, Lopatnik, Vilia, Draghiste, Chukhur, Rakovets and Kamenka, which flow into the middle part of the Prut River. In spite of the fact that this chain of reefs is quite shattered here and there it continues to be a single organism to this day, whose length is about 200 km. Thus, the "Rapids of Prut" are not right on the bank of the river but in the basin of tributaries of it, a few kilometres from the left bank.

These "coral chains" located in the north of Moldova consist of skeletons of marine organisms and animals, shellfish, corals, shells and algae inhabiting the Sarmatian and Tortonian about 10-20 million years ago. The Basarabian coral reefs have the same origin that the great coral chain in Australia has, with the exception of only one difference. Australian chain of coral reefs is almost entirely in the water and only its top is visible at 2-5 meters above sea level, but our Moldovan reefs reach a hundred meters in height and are only overland, where you can admire their magnificence without diving.

Just 3 km away from Camenca there is a reef fragmented into two parts: "The Edge of the Rock" and "Big Rock." In one of the caves, which is located in the reef "Big Rock" was found human habitation, belonging to the Paleolithic and Mesolithic eras. In the layers of the rock, at a depth of 5 meters, were also found stone tools and fossils. Traces of Neolithic fortress protected by steep banks and embankments remained on the reef.
Tags: Camenca, caves, Chukhur, coral chains, Draghiste, Larga, Lopatnik, Moldova, Neolithic fortress, Rakovets, reef, Sarmatian, Toltre, Tortonian, tsiglee, Vilia 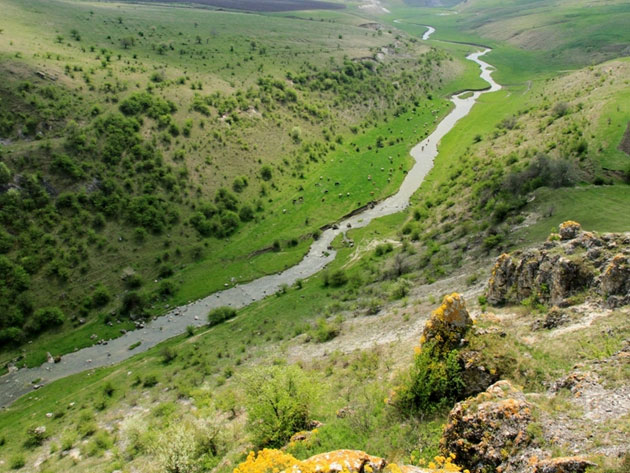