Alexandri was born in 1827 to the family of a major nobleman in the Moldovan town of Bacau. He was a home-schooler, then studied in Iasi and Paris where he entered the Medical Faculty, further on he became a student of the department of law, but he did not graduate from any of them. At the age of twenty Alexander returned to Iasi where he starting collaborating with the magazine “Dacia Literară”. A year later he was appointed director of a theatre, but was only there for two years because of the struggle of the reactionary forces against "Frenchified" young generation of the boyars. In 1844 he was involved in the Liberal Youth Authority called “Propăşirea” (Progress).

In 1848 when a wave of revolution reached Moldova, Vasile Alexandri took an active part in a movement aimed against Michael Sturdza, the then ruler appointed by the Russian court. When this movement was crushed, Alexander was forced to emigrate out of the state, where he began his real literary career that lasted more than 50 years.

At the end of the Russian-Turkish war (1877 – 1878) Vasile Alexandri served as ambassador of Romanian kingdom in Paris for a long time. He was elected a member of the Romanian Academy, where he opposed the artificial latinisation of the Romanian language. Alexandrite is one of the initiators of the struggle for the abolition of serfdom, for the liberation of slaves-Gipsies, secularisation of lands belonging to the monasteries and the establishment of a single Romanian state. Thus, the writer expresses the era of bourgeois national revolution of 1848.

The main merit of the writer is that he is one of the first to see the great wealth of folklore. He began to collect its monuments, and as a result of its activities under the influence of folk art in 1853 in Paris he published a collection called “Doine”.

Famous pastoral ballad by Alexander "Mioritsa" was first published in the journal "Bucovina" in 1850. The ballad was recorded by writer Alecu Russo in Sobezha monastery in 1846, where he was in exile. After Russo died, Alexandra wrote another variant of the ballad, that was told to him in the Mount Ceahlau. The writer changed the text written in 1850 and published a work in two collections of folk poetry - "Ballads" and "Folk Poems of Romanians".

Satire "The Story of a golden coin" (1843) to shows how foolish or wicked judges- bribetakers, district police officers, moneylenders are.

Vasile Alexandri made a significant contribution to the enrichment and development of literary language.

There is a common opinion that the poetry of the writer is not notable for great singularity. His dramatic works, to some extent, lyric and epic poetry imitate the French romantics. Other researchers noted that his works are marked by two undoubted qualities - it's a talent and his love to live.
Tags: Alley of Classics in Chisinau, Bust, Bust of Vasile Alexandri, monuments, park Stefan cel Mare, Stephen the Great Park, the Moldovan Writers, Vasile Alexandri 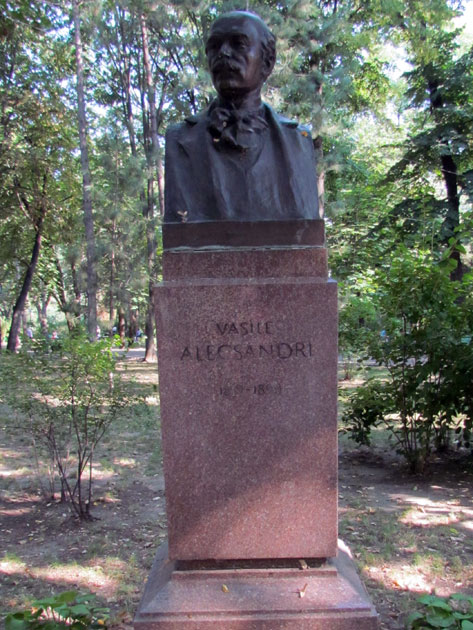