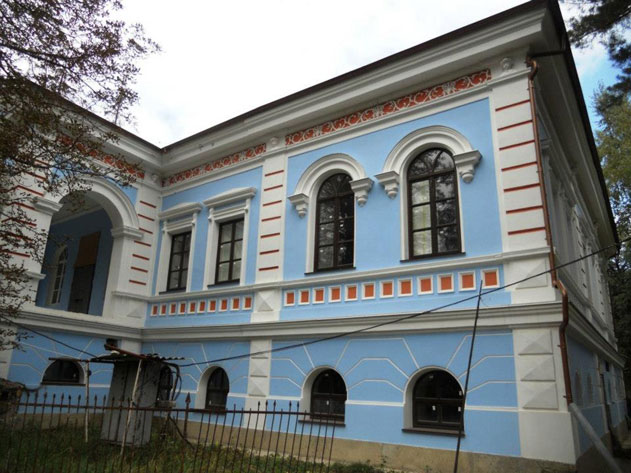 In the late 18th century the owner of the village Ivancia was landlord Darius Donici. At the beginning of the next century, according to the documentary record, in 1808 the owner of the estate became Iancu Carp and later in 1817, it passed into the possession of Iancu Rusu.

• From 1837 to 1852 the estate is owned by the landowner  Andrei Pavlovich Spyridon originally form Iasi .
• From 1852 to 1913 Balioz family becomes the owner of the estate who later built the manor house.

The estate park is one of the oldest parks in Moldova. A beautiful manor house blends harmoniously with the overall layout of the park. The building is in excellent agreement with all the of park’s composition. Full of romantic motives this wonderful relic park was founded nearly 130 years ago. The estate occupies a dominant position over the village and the surrounding countryside. This place attracts attention with its unusual appearance. Tops of pine trees towering over the landscape create a sense of strangeness; this is due to the fact that the accumulation of this type of plant is not typical for Moldova. The composition of the park includes both vegetation and minor architectural structures - artificial hills, and fountains. On the estate land there are rare plants from different countries: Crimean boxwood and Chinese wisteria, Siberian pine and ginkgo tree, popularly called the tree of happiness. In the park, along with ornamental plantings, there are fruit trees, moreover the wonderful fruit gardens, located behind the manor, takes a little less than half of the territory. One side of the manor house is decorated by an avenue of chestnut trees, the other - a hedge of Chinese wisteria. These alleys separate the decorative park from the orchard.

Once, served as a steward of Prince Manuk Bey, Karabet Artsilovich Balioz, Armenian by birth, began building this house in 1852, but the house was completely finished only 21 years later.

On the country estate land there were built warehouses, cellars, barns, stables, glacier, mill, blacksmith shop, greenhouse and a three-floor lookout tower. Unfortunately Balioz was not fortunate enough to live in the main manor house, as he died shortly in 1872 before its completion.

According to the architectural plan the house surpasses all high society homes of the time, though it differs from other boyars' estates by simplicity as of the overall style. The building itself is a beautiful architectural masterpiece and is built in the style of the Western European Renaissance with a touch of Russian classicism. The columns and bas-relief of the owner on the facade say about the specifics of the manor house.

Subsequently, the estate was abandoned by their masters, and its main building was used by the local authorities in variety of purposes. In wartime, it housed a hospital, a little later they even planned to open a sanatorium there. After the local administration took the building, then this place was a laundry room, a library and even a hostel. Until 1985, the building was empty, and then there was opened the Museum of Folk Handicrafts.

The Exposition of the Museum of Folk Handicrafts was organised on the basis of original subjects dating from 19th -20th centuries. The historical items were exposed according to the thematic principle. Here there were organised exhibitions on traditional Moldovan fisheries. Each room of the building was an exhibition hall. In one room there were fragments of black and red pottery, blacksmithing masters and wooden objects. Another permanent exhibition told about how was the art of stone dressing for creation stone flowers as well as fireplaces and columns. Moldovan weavers, creating carpets, are famous for the art of embroidery. One of the rooms was also devoted to folk costumes of the various ethnic groups living in Moldova. The exhibition was concluded by items familiar to fiddlers - a broad collection of musical instruments, among them there is the tsitera, a traditional Moldovan stringed instrument. Today on the grounds of the estate there is a museum which is similar to the last one and everyone can visit it.