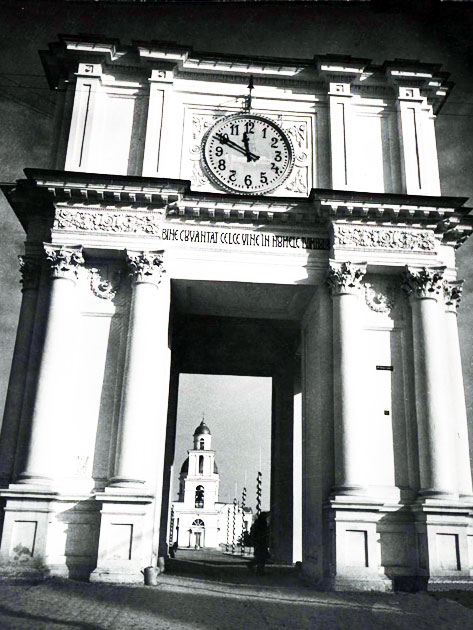 The "Arch of Triumph" is dedicated to the victory after the Russian -Turkish War and it is located in the center of Chisinau, on the Stefan cel Mare Boulevard. It is a protected historical and architectural monument.

Supervision of the construction of Arch of Triumph was the architect I. Zaukevich, it was completed in 1840. In the center of construction was mounted a bell, weighing at 6.4 tons. The bell was cast from captured Turkish guns. Arch built to commemorate the victory in the Russian - Turkish war.

Architectural structure of "Arch of Triumph" – is a 13 -meter square-shaped structure divided into two levels. Lower level is through passage with four pylons on pedestals with Corinthian columns, developed cornice and in a complex way decorated frieze. Upper tier is in attic style, it is completed by cornices and processed peels; the clock is placed at this level – looking at the square. In the lower tier, from the inner sides of the pylons between the columns were mounted marble slabs.

Arch is an integral part of the ensemble of the square and the Duomo; it stands on the same axis as the cathedral and bell tower and is the gateway to the Cathedral.

The first clock on the arch appeared in 1842. It was taken from Odessa, and seven years later a strong wind carried the clock dial, and the mechanism broke, in 1881 it had to be replaced. The new mechanism was bought in Austria. It cost the City Duma 800 rubles! The new clock lasted without repair before the war begun, until it was hit by bombing in 1941. For the manufacturing of new clocks took a watchmaker – Bogosov; for his work he was paid 14,000 lei from the city treasury.

But the story of this clock on the arch was not finished yet - in the early 2000s because of two young boys the clock nearly lost both hands. These two “entrepreneurs" tried to remove them and use them as scrap metal items. However, the frustrated thieves were caught by guards, but the damage was done, the robbers tried to bend the hands back. Fortunately hands did straighten and they are now ticking the time away on the largest dial not only in the capital, but throughout the country.

Unfortunately, time, war and the indifference of state officials have deprived us of much of the cities’ and countries cultural heritage. For example the fact that formerly within Moldova there were a full twelve triumphal arches. Over time these triumphal arches disappeared from the streets of Eminescu, Diorditsa, Bender, etc. Currently, the "Arch of Triumph" is the only survived arch in Chisinau. 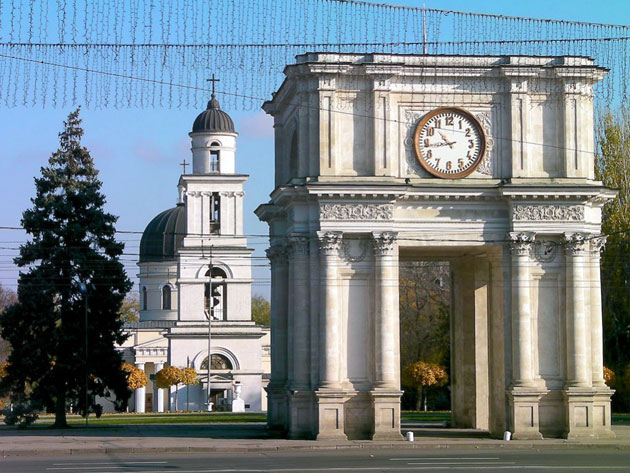