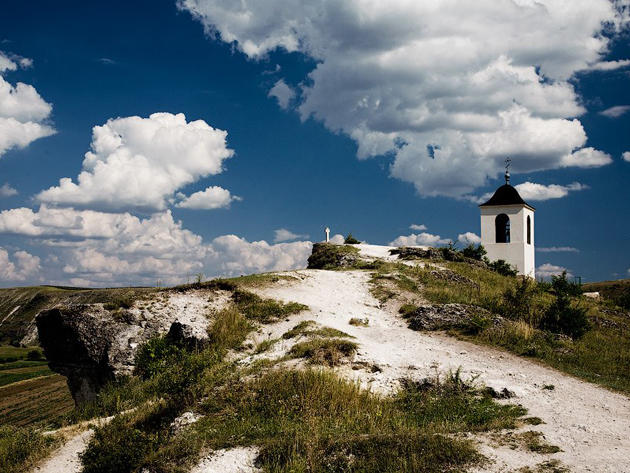 Old Orhei is a historical and archaeological complex. It is located 60 km to the northeast of our capital on the river Reut. At this particular spot there has been found traces of different civilisations.

In 6th -1st centuries BC in the Old Orhei there was a Geto- Dacian fortress, and in the second half of the 14th century there appears to have been the Golden Horde settlement Shehr al- Jadid or Yangi - Shehr. Since14th there have been various Orthodox monasteries and only later, somewhere in the 15th -17th centuries Moldavian di the town of Orhei appear. The Moldova governor Vasile Lupu moved to the town district 18 kilometers north positioning of the modern Orhei, in around the middle of the 16th century.

Three distinct distinguished periods of the history of Old Orhei have been identified.

Pre-Golden Horde period dates from the end of the 13th century and the first half of the 14th century. In this period the city was surrounded by a log wall having watchtowers. Orhei conducted active trade relations with Transnistria and with North Black Sea cities by way of the water. Various pottery wares have been found within the site suggesting that there were well developed crafts. All these excavations indicate the desire of local potters to develop different forms of glazed pottery manufacturing techniques, probably brought in from Transnistria.
Golden Horde period (40-60‘s of the 14th century). Orhei, having been captured by Tatars received Tatar name Shehr al-Jadid, which meant new city. It was rebuilt under the direction of Eastern masters, and as a result Orhei significantly changed its appearance.

In the new city buildings were being constructed, which are typical of settlements of the Golden Horde - a mosque, mausoleum - Mazar, caravanserais, public baths and so on. The remains of baths, where were not only baths but also rooms for massage and relaxation. These premises were equipped with heating and ventilation. Remains found at these sites indicate formerly luxurious interior decoration of the baths. Some researchers even believe that the Old Orhei bathes similar to the Roman Baths, other scientists have found similarities with buildings in the Crimea, the Volga region and Armenia.

Moldovan period begins with the 60‘s of the 14th century and the second half of the 17th century. Shehr al-Jadid was still destroyed in the late 60s of the 14th century. Moldovan settlement appears here about the 20s of the 15th century. The city was growing and, due to its fortification becomes strategically important. In the west Orhei fortified by two rows of half-fortified earthworks and protected by steep banks from the river site; thus, this fortification ring firmly protected the city.

The stone fortress with the Pyrkalab palace in was built in the second half of the 15th century during the reign of Stephen the 3rd. The style of this fortress was characteristic for Moldovan defensive structures of the time. The fortress walls were built in the shape of a quadrangle, and at every corner there was an observation tower. There was a Gate Tower was also towering over the entrance gate. Pyrkalab was appointed supreme military and civil chief of the city and the neighbourhood area. The remains of other buildings and construction of this period have been found within the site: the foundations of churches of the beginning of the 15th century, sauna, workshops and dwellings of craftsmen. Also, found within were found objects made of clay, metal and jewellery; much can be learnt from these finds about the trade conducted with Eastern European countries.

In 1484 Belgorod-Dniester (former Belgrade) was captured by the Turks. As a result of the capture of this place there was blocked the main trade route to the Black Sea. Old Orhei suffered severe economic damage. The city was also ravaged by Crimean Tatars who had attacked it.

Since 1940 there have been several archaeological excavations carried out in Old Orhei, the diggings were guided by Pavel P. Byrnya, Georgy Smirnov, Ivan G. Hîncu, Ivan T. Nikulitse. Since 1996, Doctor of Historical Sciences Gheorghe Postica assumed leadership of the excavations in Old Orhei. Within two years there  a museum complex called "Old Orhei" was formulated, on said territory there are villages Morovaya (pestilence), Butucheni and Trebujeni.

In Old Orhei in the rocks on the shore of the river Raut there are some monasteries. Later there was built a bell tower over the skit, now the old monastery can be found with the help of it. Landslide which occurred presumably in the 18th century destroyed all the approaches to the monastery, and it was abandoned until 1820. Then to the monastery from the village Butucheni there was dug twenty meter tunnel.

In 1890, near the new entrance there was erected a bell tower. Much later on and not far from the monastery there was built a church and the old monastery lost its meaning.

Located upstream there is one more skit but it was founded a little later. It consists of five interconnected caves, each of which has its own way out. This monastery was founded in 1675 by Pyrkalab Bosiem. 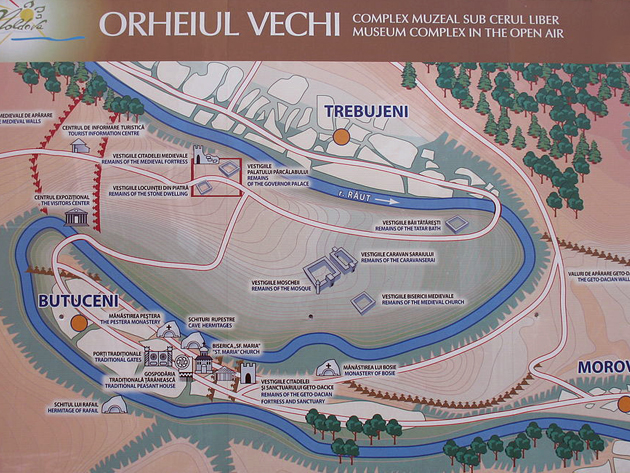