April 7, 2009
Protests against the results of the election in Moldova grew into major riots in the center of Chisinau.
mun. Chisinau, c. Chişinău, Center
Featured 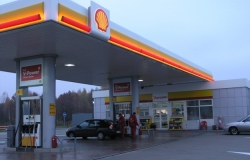